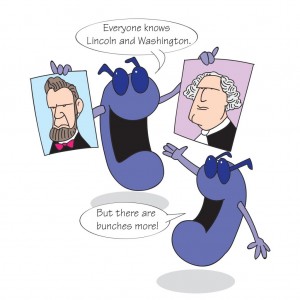 No school today, because it’s President’s Day. We know not everyone has off school today, so we felt kind of bad not learning something new. So you know what we decided to do? Of course you don’t, because we haven’t told you yet. We are trying to learn the names of all the presidents! Sounds like hard work, huh? That’s because it is! We are discovering all sorts of new things, like a guy named Calvin Coolidge was president in the 1920’s. With a name like Coolidge, we thought he would have been president of a refrigerator company, not the United States! We’re heading into the 1930’s now, so wish us luck! You can have some more fun with the presidents by downloading the coloring sheet and activity sheet for today!